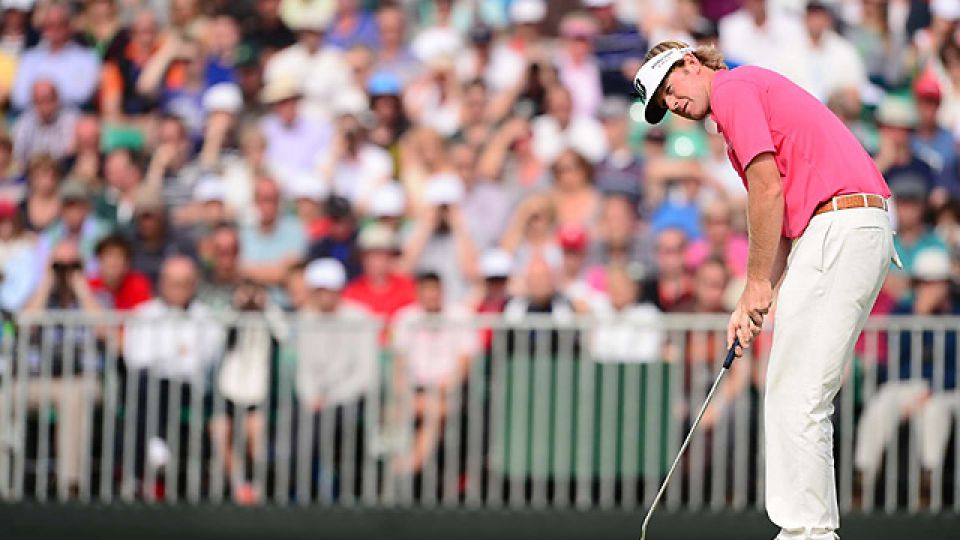 We at GRGS wanted to repost this great article. Happy golfing.

When Brandt Snedeker showed up to play the 2012 British Open, having missed the cut in all three of his previous Open starts, his record suggested he had little cause for optimism. His stats, however, said otherwise. In the weeks leading up to Royal Lytham & St. Annes, Snedeker had powwowed with a little-known golf whisperer named Mark Horton, an English numbers wiz he met through Ian Poulter. Horton crunched the data and hatched a plan. “He was like, ‘Let me break it down for you,’ ” Snedeker recalls. ” ‘You don’t drive it particularly straight, but you drive it okay. You don’t hit a bunch of greens, but you hit it okay. But you putt really freakin’ good — you’re one of the best I’ve ever seen. So you know what you need to do this week?’ ” Snedeker said he didn’t know.

Simplistic counsel? Perhaps. But it masked a subtler thought. Snedeker was not one of golf’s heroic hitters, like, say, Rory Mcllroy or Dustin Johnson, capable of launching a towering 4-iron 230 yards to a tucked back-left pin. His success depended on restraint. “Seems obvious,” Snedeker says. “But that was the first time that somebody said to me, ‘What are you doing? Don’t worry about hitting it to three feet. Hit it to the middle of the green and go on to the next hole.’ ”

The insight amounted to a eureka moment. Changing his game without changing his swing, Snedeker tied Nick Faldo’s 36-hole Open scoring record and went on to finish third. Later that season, he banked $11.4 million when he won the Tour Championship and the FedEx Cup. Once the 35th-ranked player in the world, Snedeker soared to No. 4, a statistical surge driven partly by … statistics.

Look on Tour. Snedeker is not alone. In the game’s highest ranks, player entourages (caddie, swing coach, trainer, masseuse) have swelled to include the statistician: the number-cruncher seeking answers in the data where others once found them in the dirt. Zach Johnson has a stats guy named Peter Sanders. Peter Hanson draws on the data-mining done by his mathematically minded swing coach, Rickard Lindberg. Jason Day has leaned on wisdom from Mark Broadie, a Columbia Business School professor whose expertise in financial markets has paid off in his studies of a volatile game. The list goes on.

Golfers have always had an affinity for data. But the game’s new gurus aren’t merely filling spreadsheets with the same old figures, which they widely regard as flawed. “The problem with the old stats is that they’re myopic,” Sanders says. “They offer one-dimensional answers to multidimensional questions.”

Take fairways hit. Although a measure of success in one component of the game, it makes no distinction between a drive pushed in the rough and a more damaging tee ball duck-hooked out of bounds. Or greens in regulation, which rewards a sand wedge flubbed to 30 feet but ignores a 4-iron from 200 yards that settles on the collar, five feet from the pin. Golf’s new metrics account for those pesky matters, clarifying a fuzzy picture by drawing on a dizzying array of data that was unknown or unavailable before.

Sometimes what they reveal isn’t surprising (bombing the ball really is an advantage!). But many stats-based revelations have upturned old assumptions. (Laying up on a par 5 to your favorite distance is the smart play, right? Wrong. On balance, it’s better to go for it in two.) And they’ve altered the way pros train and play. Luke Donald’s rise to World No. 1 was aided by the insights of his longtime coach, Pat Goss, an early adopter of the new analytics. Among Goss’s key findings: At the dawn of Donald’s Tour career, his crisp ballstriking masked deficiencies in his 100-yard-and-in game. Back to the drawing board they went, and out popped one of the best wedge players in the world.

“So often a golfer’s perception is based on emotional responses to his play that might not actually be grounded in reality,” Goss says. “The statistics take the emotions out of it. They give you objective feedback, which is crucial on Tour, where everyone is looking for any small edge.”

Just as sabermetrics has revolutionized the way baseball honchos scout and sign, golf’s new analytics have wide-reaching implications. They give agents and club-makers fresh data to dissect as they draft player contracts and endorsement deals. They give fans and pundits and fantasy-league managers better figures to parse. “Strokes gained-putting,” a performance metric that Broadie helped develop, has been embraced by the Tour and is now ingrained in TV broadcast lingo. It calculates the number of putts a golfer takes relative to the Tour average, taking into account the initial putting distance. At the end of the round, the tournament and the season, it spits out a stat that illuminates the fine line between failure and success.

Like other trends in golf, the new stats have trickled down into the amateur game. Though Peter Sanders counts three PGA Tour pros as his clients — in addition to Johnson, he works with John Rollins and Jonathan Byrd — the bulk of his customers are everyday golfers who track their performance through Sanders’s stats-based system, Shot by Shot.

Competition for their business is on the rise. Shots to Hole, an Australian company, allows golfers to quantify the quality of their play through a wealth of data worthy of a NASA space launch. Among the website’s nifty features: What-If-Analysis, which calculates a range of game-changing hypotheticals. With a few mouse clicks, for example, a 90s-shooter can see how many strokes he’d save if he stuck his mid-irons, say, three feet closer or added 10 yards to his drives.

Another indicator of the appeal of these metrics: the impending publication of two stats-driven books on strategy for everyday golfers, one by Broadie, the other a collaboration between Goss and Freakonomics guru Steven Levitt. Both will hit stores this fall, helping to bring golf analytics to the mainstream just as Michael Lewis’s book Moneyball did for baseball statistics.

For the average golfer, keeping detailed tabs on stats can be a tedious business. It even used to be a trial on the PGA Tour. Steve Evans, the Tour’s senior vice president of systems information, recalls the dark ages of the early 1990s, when he was charged with writing the Tour’s stat-tracking software. What better way to arouse the TV audience’s interest than by showing how talented Tour players are?

“We wanted to explain how they differentiated themselves, how they made a difficult game appear simple,” he says.

Trouble was, there were glitches in the old data, and filling them was tricky with the Tour’s existing tools. “We had data entry, but it wasn’t real-time,” Evans says. “And the hardware [back] then was very old. Guys used to sit in the back of our trailers repairing computer terminals with soldering irons.”

By the decade’s end, though, as the Tour updated its outmoded systems with new laser-guided shot-tracking gizmos, a brave new age of data-gathering began. What emerged was ShotLink, a kind of national archive of Tour pro performance, its memory banks brimming with information on every shot struck during competition. Since 2003, when it was fully implemented, the system has recorded more than 10 million shots, breaking down the data into a battery of categories. Forget fairways hit. ShotLink features 58 stats for tee shots alone.

Originally a boon for TV broadcasts, ShotLink became a treasure trove for academics, whose Ivory Tower findings spilled onto the fairways and greens. The best-publicized of them, strokes gained-putting, which Broadie fine-tuned in tandem with researchers from MIT, has supplanted tired figures like putting average and putts per round as the go-to measure of putting efficiency. Among other things, it helps explain Tiger Woods’s improved play this year. In 2013, the numbers show, Woods has gained an average of 0.83 strokes per round on the field with his putter, more than three strokes per event.

Of course, the volume of statistics available these days is too much for most people to process, whether they’re Tour pros or TV viewers. “I liken it to dumping a 1,000-piece jigsaw puzzle on the table,” Sanders says. “The question is, Where do you go with it? That’s where guys like me come in.”

Mindful of the difference between useful information and information overload, most Tour stat consultants maintain a healthy distance from their clients, communicating largely through swing coaches and distilling their findings into easy-to-swallow annual reports. But their influence is felt from week to week. Peter Hanson’s swing coach, Rickard Lindberg, consults with Columbia’s Broadie to find tactical advantages on certain courses: where to back off, where to go for broke.

“And if it doesn’t pay off in one particular instance, you don’t lose faith in the statistics,” Lindberg says. “We’re looking for a probability of something happening, not an absolute guarantee.”

Statistical analysis looks at the nitty-gritty as well as the long-term. Among the studies Sanders has conducted for Zach Johnson is a breakdown of his results according to the type of grass on which he’s played. “He’s able to find holes in stats and magnify other stats by clearing out the junk,” Johnson says. “He chews on it, digests it and then spits out something a lot more practical than ‘You’ve got to hit more fairways.’ ” Recent feedback from Sanders has focused on a vital putting statistic. “I’d just rather not reveal it,” Johnson says.

Such caution is common, especially on Tour, where the tiniest advantage can pay giant dividends. Snedeker’s stat-cruncher, Mark Horton, is known for treating his work like a state secret, although Snedeker is more loose-lipped. In winning the 2013 AT&T Pebble Beach National Pro-Am, Snedeker followed Horton’s advice to focus on the par 5s at Spyglass, one of three courses in the event’s rota. The stats suggested that aggressive play on those holes presented the best chance for separation from the field.

“We as Tour pros either don’t listen, or we think we have all the answers,” Snedeker says. “That’s why Mark and I work so well together: I listen to what he tells me. He’s just using stats and data, and saying, ‘I’m just telling you, black-and-white.’ “

Of course, even the best data, and game plan, can only go so far. Three months after his AT&T triumph, Snedeker played his way into the final pairing on Masters Sunday, claiming “a completely clear focus on what I need to do” to win. But his putter betrayed him, and he shot a 3-over 75 to tie for sixth. Was it pressure? It’s hard to say. There’s no metric for measuring a player’s nerves on a given day. Rest assured, though, that the number guys are working on that, too.

Furyk’s 58: What the PGA Tour record-low round looks like on GRGS.