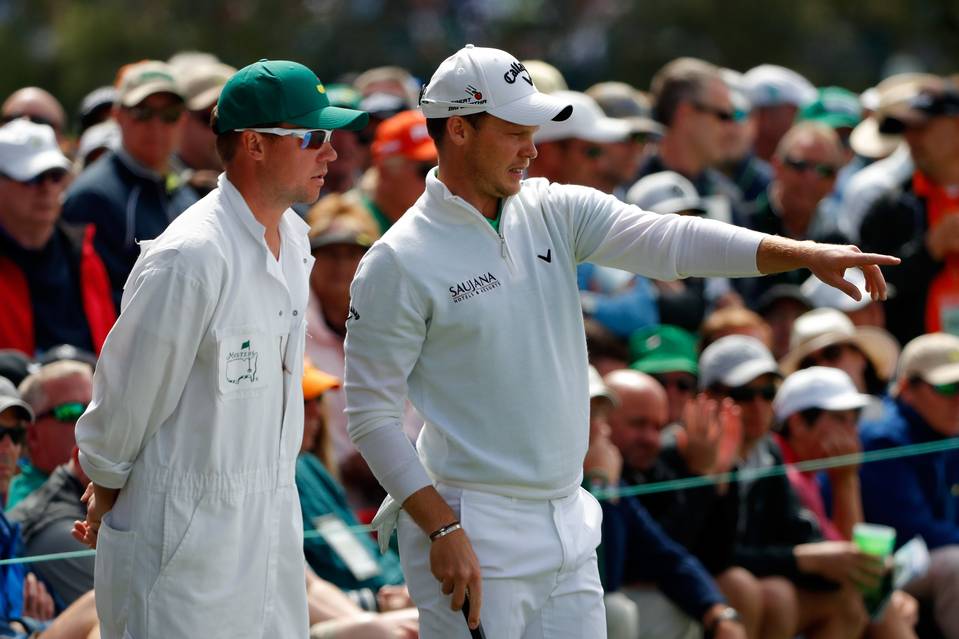 Danny Willett and Bryson DeChambeau lead a crop of pros using analytics to their advantage on the course.

Before he won the Masters last month, Danny Willett had limited experience at Augusta National Golf Club. He had played in the tournament only once before, and was among the last players to arrive for practice rounds this year. But Willett also knew something many of his competitors did not.

His caddie had received an email from a London analytics firm with data that offered a hidden insight about Augusta’s par-5 holes. The numbers showed that when players lay up—leaving their ball short of the green to avoid a water hazard—they fare better when doing so as close to the green as possible, rather than the more distant spots where players typically prefer to swing from on their third shots.

It was a small nugget of data, one of several Willett used to devise a strategy for playing the course. But for professional golf, it represented a sea change.

Willett, a 28-year-old Englishman, is among a growing number of players who are using analytics to make better decisions on the course. In determining where to aim, which club to use and what kind of shot to attempt, more golfers are beginning to play the percentages.

If that sounds trite in 2016, it’s because of how slow golfers have been to embrace the kind of statistical analysis that has become commonplace in other corners of the sports world.

“I’m telling you right now, we are 10 years behind every other sport,” said Bryson DeChambeau, a PGA Tour rookie and one of the game’s wonkiest players. “And I feel like we’re at the forefront of all this technology, all this information, all this stuff that can allow us to play better.”

The raw information has been available for more than a decade. Since 2003, the PGA Tour’s ShotLink system has logged the location of every shot hit at Tour events. But it took nearly a decade for that trove of performance data to change the way the game is analyzed.

In 2011, the PGA Tour began publishing the “strokes gained putting” statistic, which evaluates putting based on the number of strokes a player gains relative to the rest of the field. It has since added a “strokes gained tee-to-green” stat. Later this month, the Tour will begin breaking that down into strokes gained off the tee, on approach shots and around the green.

But to the extent that players have looked at those numbers, it has largely been as a tool to evaluate which parts of their game need work. Even then, they are usually filtered through a coach or caddie.

Last winter, Jordan Spieth received a thorough breakdown of his game from Mark Broadie, a Columbia University business professor who pioneered the strokes gained concept. Broadie also sends weekly reports to Colin Swatton, the caddie and swing coach for world No. 1 Jason Day, detailing how past tournaments on a given course have been won. Swatton uses the reports to set goals for every hole, which can influence how aggressively Day plays. But using data to assess the risk-reward of a given shot is still uncommon.

“I get asked a lot about the future of golf,” Broadie said, “and my answer is, ‘strokes gained’ is looking at performance, but the thing that really excites me in the future is applying similar ideas to course strategy. I’ve always thought that’s sort of the next important opportunity.”

American Brandt Snedeker, the No. 16 player in the world, is ahead of his time in that regard. Since 2011, he has based much of his course strategy on advice from a British statistical guru named Mark Horton, who helped him go from a middling pro to an eight-time winner. Snedeker even builds his schedule around Horton’s analysis, choosing tournaments where the short game—his strength—has been a bigger factor than driving distance in determining the winner.

“There are golf courses that I love that I don’t play anymore just because they don’t seem to suit my game,” Snedeker said.

But if golf is about to go even further in the direction of baseball, the standard bearer may be DeChambeau, a 22-year-old rising star and self-proclaimed golf scientist.

In January of 2015, while at Southern Methodist University, DeChambeau attended a seminar put on by a former pro named Scott Fawcett. Using shot distribution patterns and scoring data, Fawcett developed a system that teaches players where on the green to aim to achieve the lowest possible score based on distance, hazards and hole location.

At that point, DeChambeau had simply been aiming for the pin on approach shots—a typical but inefficient strategy, according to Fawcett. DeChambeau went on to win the NCAA individual title and the U.S. Amateur, becoming only the fifth player in history to win both in the same year.

Now, after turning pro last month, DeChambeau is working with Microsoft, the Tour’s operating system and analytics partner, to develop technology that could help him understand, among other things, the relationship between grip pressure and shot quality and how to read greens in a more scientific way.

“There are things he would like to measure that there are no solutions for on the market,” said Mike Downey, Microsoft’s principal evangelist for sports. Downey has talked to some other players, but with DeChambeau, the brainstorming sessions have gone on for hours.

“There are analytics that can allow players to play better,” DeChambeau said. “Will everyone use it? No. They don’t think it’s necessary. They rely on their feel way too much and they trust that more.”

To be sure, even the best strategies are only as effective as a player’s ability to carry them out. Willett’s plan for how to lay up, if necessary, at Augusta was rendered largely irrelevant by some poor shots on par-5s. Still, Willett publicly thanked the analytics firm, the 15th Club. His caddie, Jonathan Smart, said the firm’s analysis has helped Willett rise to No. 9 in the world.

The benefit may only amount to one or two strokes in any given tournament. But in a sport where the margin of victory is often just that thin, Smart said, “Just 1% is everything.”