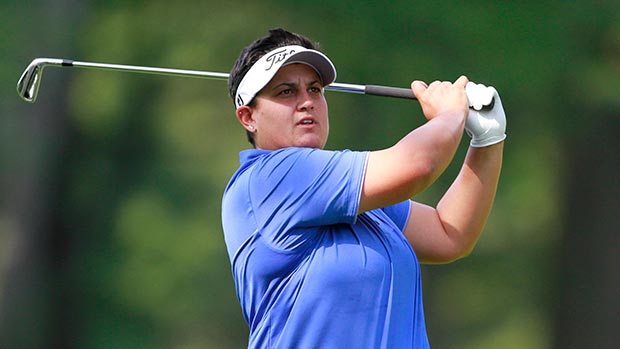 Daniela Iacobelli only made 2 cuts from the 15 events she played during the 2013 LPGA Tour season. A year prior, she’d won the final event of the Symetra season just to sneak into the top 10, but she noted that her game, both mentally and physically, was not up to snuff on the LPGA.

This year has been a much different story for Iacobelli, and she gives GRGS some credit for her successes on the course.

“It’s unbelievable the numbers the (GRGS) application gave me access to and it was a huge help.” Iacobelli found that when she missed the green in regulation, she had an average first putt length of 7.4 feet.

“I looked at my make percentage from 7.4 feet and realized that I need to get my chips closer and I clearly needed to work on my seven foot putts,” she says. “Once I had 15-20 rounds under my belt, it was interesting to see where there were gaps (in her game) and during the season I worked on those areas and it made my practice more efficient. It helped me realize what I needed to improve.”

Iacobelli’s interest in golf statistics spawned from a Golf Channel program where Zach Johnson, Masters champion and 12-time winner on the PGA Tour, revealed that he employs a full-time statistician. “Here is a guy who has won numerous tournaments including The Masters, why is he employing a statistician,” Iacobelli asked herself.

This Monday GRGS co-founder Josh Marris will be the guest speaker on the Golf Smarter Podcast, the #1 golf podcast, for a Q&A session with host Fred Greene. Daniela Iacobelli will be joining the conversation, so tune in live on Blab to learn more about GRGS and how it can help improve your game this Monday at 5pm Pacific Time/8pm Eastern Time, and participate in the conversation to have your questions answered by Josh or Daniela.

Daniella has been using the GRGS application since March 2015 and has 45 rounds from this season recorded.